Now-as much as I love cooking, sometimes I hate trying to come up with something to make for dinner on a whim. So I started literally planning dinner out for an entire month, using a calendar that I found on Microsoft Office.

We don’t always stick to it, and I do sometimes have back up meals to make (ramen & grilled cheese anyone?), but it’s helped tremendously as far as knowing what I’m making and what I’m going to the grocery store for.

First thing I do it print off a calendar from Word and then hand write important stuff in, such as dinners out, parties, etc. Things I know I’m going to be gone for and don’t have to worry about making dinner that night. Then I rack my brain and scour Pinterest and cookbooks to fill in the rest of the dates.

Then I go back, and type it all up on Word, so it looks pretty.

Then I grab a notebook, college-ruled of course, and write down the meal and all the ingredients that go in to it.

After I’m done giving myself carple-tunnel syndrome doing that, I rummage through my pantry/freezer/spice cabinet/fridge and cross whatever I have off the list. Then using what’s leftover and going through everything again, I make my grocery list for the store(s) I need to go to. 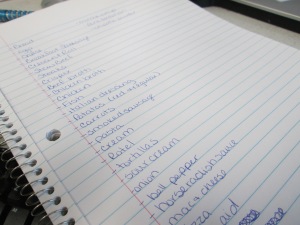 That’s only a semi-finished list. I’m sure there are things that I don’t need to buy and stuff that I need to add to it as well. I haven’t been to the grocery store in a long while, so it may look like a massive list to some.

I generally shop at three different stores. Dierberg’s, Mannino’s (a local meat market/grocery) and Target. Once in a while I will venture into the land of death, which is Wal-Mart because there are a couple of things we like that you can only get there. Then I come home and put everything away where it goes and take a nap because some days grocery shopping can be a monumental effort.