Sunday morning I was up bright and early to run the 30th annual Make Tracks for the Zoo 5k.

I say bright and early but in reality it was rainy and early.

I took a few risks the night before the race and had sorbet and crayfish and shrimp which is definitely not something I have on any kind of regular basis, so I had to cross my fingers there and hope for the best.

I wore my Asics 2000’s, lululemon Inspire crops, and a Run:Swiftly short-sleeved top. I really liked this ensemble because it was definitely muggy once the sun came out about five minutes into the race, and neither the shirt nor the pants got overly soggy and weighed down.

They changed the course a bit this year and it was a little flatter than the past. I will say I did like it a little more because I thought there was a bit more shade on this route.

It rained the entire way there and stopped just as I was getting out of my car. I arrived to the start line with maybe 6 minutes to spare, just enough time to put water in my handheld and make my way to the actual starting area.

Because of this I was definitely at the back of the pack and had to weave around a lot of people before i could settle into a semi-comfortable groove. Even then I still did a lot of weaving and pass all the way up to the end, which was a bit of a bummer. Plus, it was easier to let myself slide into a very comfortable pace instead of pushing myself because all the people around me were going slower as well. 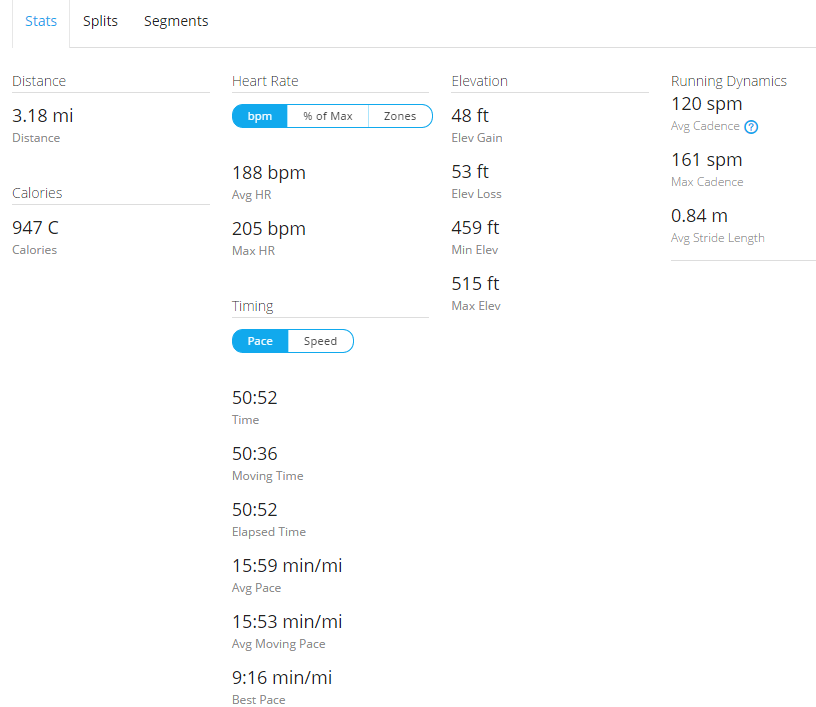 My first mile clocked in around 15:50 (or 15:34 moving time) and there definitely a few times I had to slow WAY down before I could move around a person. Just before mile two the sun came out and it started to get swampy real fast around the course. I took a one minute walk break at the beginning of the second mile and clocked the second mile in 15:56.

The second mile on the course actually came .2 of a mile sooner than it should have, but they made up for it in the third mile, which made it seem extra long. My third mile came in at 16:28 and then I tried to pick it up and get to the finish but it was hard given how muggy it felt.

Overall, I’m pretty pleased with my results given how crappy my training had been and how sucky I felt at the beginning of the race. There was a time where I thought I actually might puke on the course, which I’ve never done. So all in all, I’m not terrible upset by the numbers. It just means I need to buckle down and work on my training a little better for the next 5k in June.

My official stats are a little off from my Garmin pace, with my Garmin giving me an average pace of 15:59/mile and my chip time from my bib giving me a pace of 16:21/mile. Not really certain were the 21 second difference comes into play and which one to call my official pace, but I’m thinking I will go with the Garmin time (obviously!).

I do want to make one little note though-

I get that it’s a family event. I do. I understand little kids wanting to participate in the big race with mommy and daddy. But at what age is that really appropriate? How young is too young to be pushing 3 miles? And if they do want to run with you, guess what? You need to go their pace. Not drag them with you, or scold them for not “keeping up” with you or holding you back. You should be encouraging and positive through the whole thing, stopping when they need to stop and all that other jazz. Because that’s what’s best for them, mentally and health wise!